Last year, the European Commission launched five EU missions to tackle important challenges related to health, the environment and climate. One of those missions is “100 climate neutral and smart cities by 2030”. A project in which the selection of 100 cities was recently announced. These cities also include the Walloon city of La Louvière. BE REEL! interviewed their alderman Nancy Castillo. 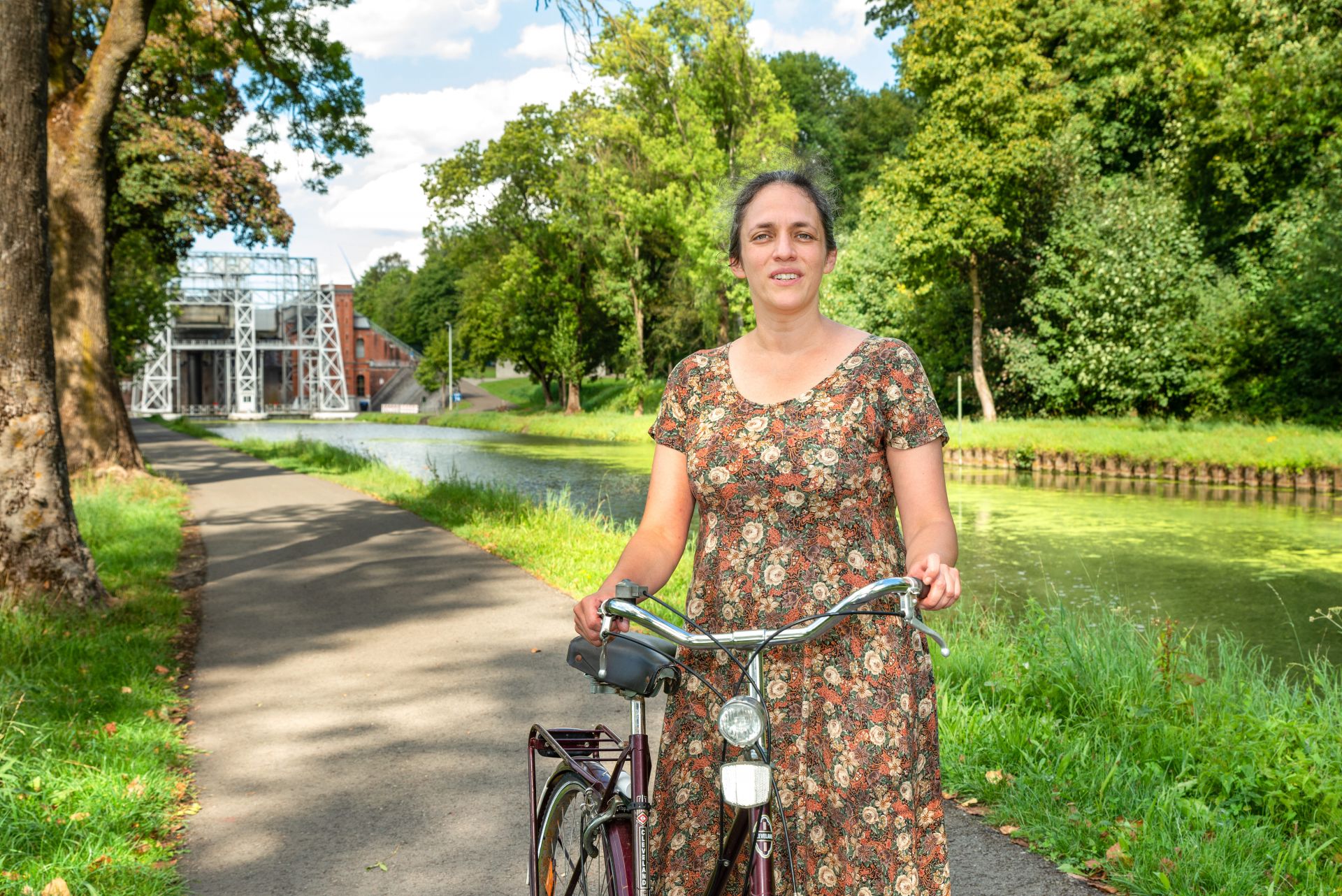 Nancy Castillo (43) has been alderman for the party Ecolo in La Louvière since this legislature. She is a mother of 4 and has a passion for foreign languages. Her educational background in classical philology and Eastern languages ​​proves this. Before she became alderman, she was a teacher of Latin-Greek and worked as a civil servant in the Concise Reports Service of the Belgian Chamber of Representatives.

What is your current position and which projects are you currently working on?

Nancy: “As alderman I am responsible for the environment, sustainable development, energy transition, housing, mobility and animal welfare. As alderman I also try to follow all the projects in my city. We have been particularly busy with mobility. For example, “Wallonie cyclable” wants to build a better infrastructure for cyclists and promote cycling in the city. Another project we are currently working on is making our industry greener. Starting with the mining district of Bois-du-Luc where people are still living today. The aim is to make these homes low-carbon by renovating, insulating and so on. We hope for European subsidies from the Regional Development Fund (ERDF) for this.”

What can you tell me about the city of La Louvière?

Nancy: “La Louvière is a city in the Walloon province of Hainaut with about 80,000 inhabitants. On all city services together, about 700 people work for the city. Seven people work at the Energy-Living service. I mention this service so explicitly because it is important in our pursuit of climate neutrality. We are a city with a rich history in coal, steel and ceramics and therefore we have many old buildings. Our buildings and homes are responsible for 60 percent of greenhouse gas emissions. That's a lot.”

Which energy renovation services does the city offer?

Nancy: “We have an an energy counter where the municipality provides active advice about the various interest-free loans for renovation work. In addition, they also provide information about the other grants of the Walloon Region and the city. We also offer a municipal premium for the energy audit. And soon citizens will also be able to receive a municipal premium for the renovation work itself, on top of the regional premiums. Finally, the 9 largest cities of the Walloon Region received a budget of millions of euros to invest in urban projects of their choice. La Louvière chose to use one million in the form of renovation grants.”

If you are going to live in La Louvière and want to renovate your home, what should you do step by step?

Nancy: “First you have to go to the energy counter at the municipality for a first meeting, but also to know your rights and obligations and to know which steps you will have to take. Do you require a building permit? Are you entitled to an interest-free loan? The advisor can also immediately guide you and answer your technical questions. Secondly, you apply for a permit, just like an energy audit which is usually required in Wallonia, unless you only change the roof or the heating. There are also premiums for this. Thirdly, you request price offers from various contractors. The energy counter can help you to understand the offer and to compare it. Finally, you apply for your loan, carry out the renovation work and receive the premiums. For owners who come from a vulnerable group, we try to shorten the waiting time between applying for and receiving premiums.
The pursuit of climate neutrality is above all a commitment
So, La Louvière is one of the 100 climate neutral and smart cities. Can you explain that project a bit?

Nancy: “I can't really say much about it. There is currently no permanent employee on this project in our city, which is of course subject to change. What I do know is that our candidacy has been approved and that the EU will choose 30 cities as pilot cities from that selection of 100. Bear in mind that the selection is not a competition. It does not necessarily reward the best students in the class, because in Wallonia itself there are cities that have not been selected, but are further ahead than La Louvière in terms of climate neutrality. I did read a nice comparison on the website of the city of Leuven. They compared it to the moon landing: a great event that can set an example. It's actually about this: La Louvière is a relatively poor city with a lot of industry. If we can be the first to become climate neutral, it can inspire similar cities with an industrial past or with around 80,000 inhabitants and show that it is possible. After all, every selected city is different and starts from a different situation.”

What exactly is a Smart city and how will La Louvière become one?

Nancy: “I interpret it as a city that deploys and uses all innovative technologies, not so much because it is possible, but to achieve climate neutrality. This climate neutrality may not always be visible to the public. I am thinking, for example, of the monitoring of municipal buildings for which we have an action plan to better insulate them and connect them to a renewable energy source. Whether La Louvière will effectively be climate neutral by 2030 remains to be seen. We will try, of course. We had an action plan to reduce our emissions by 40% by 2030 and now we need to get to 100%. That will be a tremendous effort, especially because it will require a progressive mentality shift among citizens. Going from thirty to three hundred buildings to be renovated is not something you do overnight. In that sense, the pursuit of climate neutrality is primarily a commitment. Last year, the city approved the LLO 2050 project, which is based on three strategic objectives. Firstly, it wants more space for nature and greenery in La Louvière. We call it a park city. Secondly, La Louvière has no historic center and consists of many separate villages. The objective here is to create civilian constellations and connect the different villages via safe pedestrian and bicycle routes. A third objective is to give our city multiple resilient economies, where it used to be a mono-economy (=coal). In that sense, it might be interesting as a twinning city, which this EU mission gives the opportunity to do, to choose a city that only had 1 economy.”
The approval of LLO2050 was the push we needed to submit our candidacy.
How did La Louvière actually get into this project?

Nancy: “We have a service strategy that picked up the call. The mayor's office then collected the necessary information from the various services and submitted a candidacy. This project came just in time, because I don't think we could have done it two years ago. The approval of LLO 2050 was the push we needed.”

La Louvière is also a BE REEL! partner. Are you aware of our project?

Nancy: “Yes, I know that for four years we wanted to renovate 150 houses and 50 apartments a year. I think we are now at about 60 to 70 renovated housing units. So we still have work to do, but we are making efforts to achieve this. We maintain a list of best practices on how best to guide owners, for example.”

Suppose: as a policy maker you are allowed to change/draft 1 policy measure to help achieve your objectives. Which one do you choose and why do you choose it? (You can choose the policy level yourself)

Nancy: “I would like to change the policy on company cars. There are simply too many cars in La Louvière. Transport is the only sector that has not reduced its emissions. The federal coalition agreement does state that all company cars must be electric by 2026. However, I am not convinced that this is the best solution. It does not solve the traffic jam problem and it is equally detrimental to air quality, because they cause a lot of particulate matter in the air.   A possible solution is to focus on alternatives and give people the choice. Is that second company car necessary? Public transport is very important here. I am pleased that a lot of progress has already been made here compared to 15 years ago. I'm from Brussels and when I came to live here in 2005, public transport here was something very abstract. There were no route plans, no timetables, nothing. Fortunately that is now a thing of the past.”

On which hypothesis/theme about energy efficient renovation would you like to see a study or concrete action published and why?

Nancy: “Something I am curious about is how district heating can be used to heat homes and public buildings. With our steel industry we have a source of heat. Why don't we use that heat to warm a hospital, for example? Now that heat is lost. Our LLO 2050 project also has an action on a district heating, but we do not have a precise study on this.”

Finally, a question about the future: will it work?

Nancy: “We are almost 2023, so the targets may not be fully achieved, but we are hopeful to have at least some trajectories in place by 2030 that can serve as examples for other cities with a similar profile.”

Thank you for this conversation!
More information about the EU missions can be found here
The website of the city of La Louvière
Subsribe to our newsletter!

LIFE IP CA 2016 BE-REEL!
With the contributuion of the LIFE
financial instrument of the European Union.